A graphical user interface is the most common type of user interface seen today. it is a very friendly way for people to interact with the computer because it makes use of pictures, graphics and icons - hence why it is called 'graphical'.

A GUI (pronounced gooey) is also known as a WIMP interface because it makes use of:

Pointers - a symbol such as an arrow which moves around the screen as you move your mouse.  Helps you to select objects. 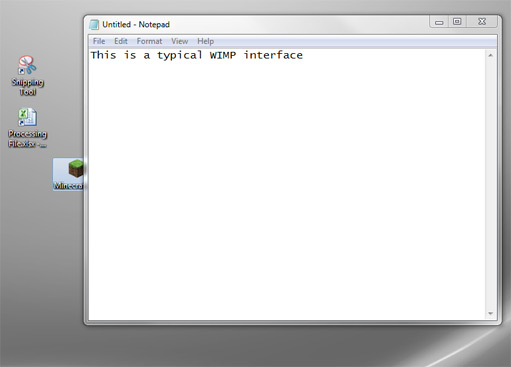 All modern operating systems have at least one type of GUI. For example Microsoft Windows is a GUI, Apple Macintosh has another. Linux has a number of Graphical User Interfaces available.

Many programs that run in Windows are known as WYSIWYG - this stands for What You See Is What You Get. In the early days of word-processors, you typed your essay or letter on the screen, but it could look completely different on the printer. A GUI normally tries to ensure that whatever you create on the screen will be very similar to what appears on the printer or the web.