This is an input technology which is most commonly found on mobile phones and tablet computers. 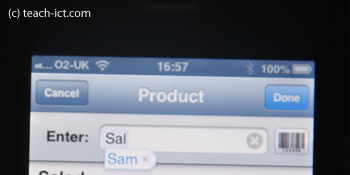 The technology allows words to be entered by a single or a few key presses. Instead of having to type out the whole word, the software tries to predict the most likely word that you want.

Predictive text allows you to type faster and also to reduce the number of keystrokes or key presses that you make, thus helping people who have difficulties typing. It can be very frustrating though when it keeps predicting the wrong word, so it is useful to know how to switch it off on the device you are using.

Sticky keys is a feature available with most computers.

It is an accessibility feature to aid users who have physical disabilities.

Sticky keys allows the user to press a 'modifier' key such as Shift, Ctrl, Alt and have it remain active until another key is pressed.

When sticky keys is activated in Windows, a beep is sounded whenever the Shift, Ctrl or Alt keys are pressed.