It is a three dimensional (3D) visual technology designed to give you a sense of depth when viewing a program or film. It has become very popular recently, with many cinemas offering '3D' films and televisions offering built-in 3D technology 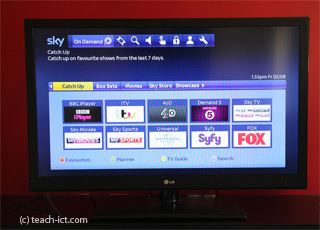 How does it work?

All current methods take advantage of the fact that your brain is able to combine the images from your left and right eye to give you a sense of depth.

Unfortunately, not everyone has 3d vision - this author has only ever seen out of one eye, so 3d is a bit of a mystery!

The way it works is that the projection device or television sends out two images, each slightly displaced from one another.

This is done by using an electronic pair of spectacles, but instead of glass lenses they have a pair of electronic shutters.

Now your brain senses two images and combines them into one solid-looking experience. This interplay between the spectacles and the film continues to the end of the film

Not really, even sixty years ago cinemas were trying it out. Back in the day they used a red lens and a green lens to differentiate the two images. But it never caught on because of the inconvenience of having to wear the special specs and the effect was not as dramatic as it is today.

Yes, because something has to be compromised to create the two images.

The choices are:-
1. Interleave the images in time. At one instant image 1 is present, then the next instant image 2 is displayed. But now each image is only present for half the time. You will sense this as a loss of brightness.
2. Interleave the images on the screen. With this method half the rows of pixels are used by image 1 and the other rows are used by image 2. But now you have effectively halved your resolution. Not so easy to give you a HD experience.
3. Use two projectors, or use a television with twice the resolution. Both of which are very expensive options. Only the most sophisticated cinemas can afford to do this.
4. There are different 3d technologies in use and they are not compatible.

The most inconvenient feature of 3d today is having to wear the specs / visor. Many companies are looking at ways of providing a 3d experience without the need to wear any special equipment on your part.
For instance, 3d holographic displays produce truly 3d images as you can literally walk around the display to see the back or the front. But these are still laboratory items at the moment.

As an interesting aside, this is how it is possible for the passenger in a luxury car to view a DVD film on the dashboard screen whilst the driver can only see the boring Sat-Nav on the same display at the same time.

Perhaps eventually we will have full-colour, wide-angle, user-tech free 3d technology. But not quite yet.